The transport industry is really going through a tough time at the moment, people don’t know what to think and liability, or more to the point, legal liability is on everyone’s radar. But! the frustration is that whilst people are trying to do the right thing and lets face it, doing the right things means investing hard earned cash, some transport operators out there just don’t give a damn. 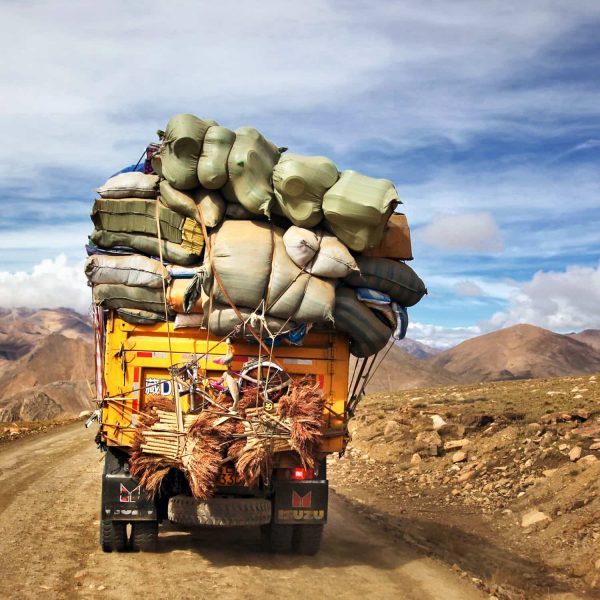 To call a business owner out like that is a pretty bold statement.

But even if you didn’t know what was your ultimate legal liability, would you still throw a rope over the load? My personal feeling is that any decent, caring road user would!

There is much we can say about this picture, and most people are stating the obvious; the driver needs the book thrown at him or her and the operator is a sham. Not to mention the applause of the NSW Police in catching this disgrace out, to enforce the law and in doing so, protecting the other road users.

Those other road users would be you and I.

So let’s go through the challenges that this particular road user is raising for the rest of us, by making a few assumptions based on the picture evidence we have.

One good point to make, if you can see the positives mind you, is that the load is unitized to the pallets, which is a good thing, considering the load seems to be some form of loose items and potentially of substantial weight.

My 20 years’ experience tells me this vehicle (I feel a Dyna 350 or 400) has a total capacity of approx 3 to 4.5 Gross Vehicle Mass (GVM), so it doesn’t fall within the Heavy Vehicle National Law. It still means though that the capacity of the vehicle is roughly 1.5 to 2 tonne of payload capacity. The pallets at a rough guess, all 8 of them, weigh roughly 650kg each, giving a total load of 4.5 to 6 tonne.

The owner and driver still have a duty of care. They must still ensure that their duty does not impact the lives of the employees or the public even though they are not liable under the Heavy Vehicle National Law.

A Western Australian court made a decision that a Harvey Norman Franchisee was to pay a sum of 25% of the total sum, paid by Harvey Norman Corporate to an injured customer because the Franchisee made no attempt to conduct a risk assessment or check the risks involved before “sending its customers into an area, where there was a foreseeable risk of injury which was not insignificant”. The Court noted that “a reasonable store owner” would have conducted a risk assessment.

A total sum of $865,000 was awarded in damages and costs, to be paid by the Franchisee Osborne Park Commercial Pty Ltd, who denied any wrongdoing.

This goes to demonstrate that if this driver in the pictures herein had of severely injured or killed someone, the consignor may still have been held liable even though they were not necessarily under the jurisdiction of the Heavy Vehicle National Law or responsible for the on-road safety of the goods, while under the care and supervision of the driver.

The consignor, in this case, should still have ensured the following;

Thankfully no one here was hurt, but it could well have been a different story, one which you would have seen on the news at 5 pm and not on our Blog. Thankfully it is on our Blog and no-one this time was killed, significantly injured or the businesses responsible put on trial for a substantial sum, which puts most out of business.

Mark Bouris (Known from Mentored) was quoted recently, “Companies go out of business for four main reasons…….”, the fourth was not mitigating risk.